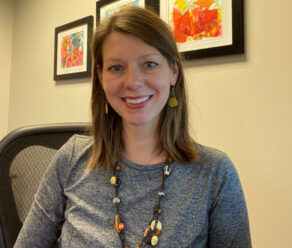 Anne joined the NNORC team in January 2022. Prior to JFS, she served as the executive director of the Adult Day Health Care Council (ADHCC), an affiliate of LeadingAge New York. Anne was hired as a home and community-based services policy analyst in 2008 and became executive director of ADHCC in 2014. In this capacity, she was responsible for all issues related to medical model adult day care programs, including reimbursement, advocacy, regulations, research, and education.

Anne has also held policy and management positions at the National Apartment Association, the New York Association on Independent Living, and the New York State Assembly.

Originally from the Midwest, she holds a bachelor’s degree from DePauw University in Greencastle, IN. Anne and her family are proud residents of Albany and love living in the New Scotland neighborhood!