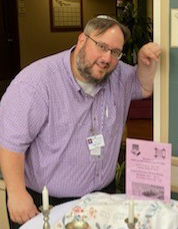 Rabbi Ami Monson became the Jewish Community Chaplain of Jewish Family Services of Northeastern New York, serving Daughters of Sarah Community for Seniors, in June 2021, just after his rabbinic ordination from the Academy for Jewish Religion in May 2021.

From 2014-2020, Rabbi Ami served as the Director of Youth Engagement and Rabbinic intern at Valley Beth Shalom in Los Angeles, CA. During that time, Rabbi Ami also served as an intern at The Nest: Board and Care Facilities and the Los Angeles Jewish Home where he cemented his passion for caring for older adults. Previously, Rabbi Ami was the Program Director for Maccabi USA/Sports for Israel from 2002 through 2013, Associate Director for Hillel at Queens College in Flushing, New York from 1998-2002 and a second-grade assistant teacher at The Perelman Jewish Day School in Elkins Park, PA from 1997-1998.

Rabbi Ami holds three master’s degrees from Gratz College in Jewish Education (Administrative Track), Jewish Communal Service, and Jewish Studies. He earned his B.A. degree in Comparative Religion, along with a certificate in Jewish Studies, in 1995 from The University of Pittsburgh.

Originally a Philadelphian, he is the son of Rabbi Michael A. Monson and Dr. Rela Mintz Geffen z’l and the stepson of Fani Magnus Monson. He is the grandson of Rabbi Joel S. Geffen who served as the Rabbi at Temple Beth El in Troy, NY in 1929 where he built the congregation and organized a community talmud torah along with adult education and youth groups.